Cultural, Development And The Tribal Situation: A Conceptual Discourse

First of all, one needs to explain both the concepts individually which will greatly contribute to their integration in the context of tribal development. A very popular definition comes from UNO which says that "the ultimate purpose of development is to provide increasing opportunities to all people for a better life "(1975 ). This may be further simplified as creating conditions for wholesome living of the members of a community .Very briefly social scientists explain it as the rise in the standard of living. The development specialist Flammang (1979) has equated 'growth’ with development. One can analyze that all developments may be ‘growths’ but all growths are not development. Development may be applicable to individual and society both. When we are discussing about the interface of culture and development, we are bound to bring the social or group oriented development situations. Most often development is understood as economic development. This may be a priority area which is also well applicable to rest other aspects of society and culture of man. But the famous scholar E. F. Schumacher being an economist has defined development in a very scientific manner where economic dimension has never been emphasized. To him, "Development does not start with material goods, it starts with the people, their education, organization and discipline" (1971 ).Perhaps this is the most befitting definition for development. However, anthropologically speaking, development may be a progressive change in a desired or required direction of the people.

Culture, on the other hand, is the way of life of a social group. With holistic nature, it pervades into all aspects of social life controlling the people through various prescriptions and proscriptions as well as maintaining the customs and traditions for the future. Culture embodies all the major social institutions like economic, social, political and religious organizations. Therefore, culture is always the master variable, which creates the ground for all types of activities related to maintenance as well as promotion or development.

(i) Culture, with its traditional values becomes an obstacle to development.

(ii) Culture of simple society becomes a victim of development.

Due to the impact of modern technology and modern cultures, the culture gradually loses its core values and structures leading to the ultimate collapse of cultures. Sometimes due to acculturation and other aspects of change, along with the way of life, the language or mother tongue of a tribal community  also changes. If language, the carrier of culture, changes, the culture is drastically affected. It also happens with religious, social and other traditions of the society which ultimately result in the structural changes of the tribal society. As a result, the tribal cultures develop reactions against development or modernization and most often they are expressed as barriers. The anthropologists who study the development process in so called primitive or economically backward tribal communities, they always intend to --(i) preserve the tribal culture and maintain their ethnic identity and (ii) protect the customs, traditions, values, beliefs, etc. of a tribal community. Therefore, anthropologists vividly study development both as an obstacle as well as promoter of cultural values and traditions. Such obstacles within the culture are taken as barriers and promotive factors as stimulants. Anthropologists also classify them universally as -psychological, social and cultural barriers as well as stimulants to change or development.

At the end, it is needless to state that the above-mentioned conceptual discourse on the culture and development are the realities of socio-cultural traditions of tribals all over the world. In most cases by accepting the values of modern society, the tribals lose their own values and traditions and in some cases they also accept and encounter a complete change of their tribal identity. However, the process of change turns back and the so called tribals after losing their traditional values internally develop a desire to revive their traditional culture. Through revivalistic attitude or sometimes revitalization movements the culture reappears and survives even though the modern values in the field of economic transactions exist simultaneously adding to the quality or standard of life at par with modern society. 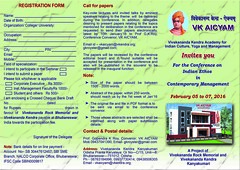